Armenian-American conversation. based on cinema

Since Independence, Armenia has been trying to tell about itself in the language of culture, and also to have dialogues with the international community in the language of culture. The US Embassy in Armenia has always been involved in the cultural life of Armenia and supported especially those projects , that are based on the preservation and popularization of universal values of cultural heritage.

-Mrs. Ismail, It has already been several months that you are working in Armenia, have you managed to form a certain idea about our country and our people?

-Yes, It’s been a short time, that I’m here, but I’ve managed to see a lot, to learn, to feel. I made sure that Armenia is a beautiful country with a rich culture.

The Public Relations Office of the US Embassy in Armenia is carrying out some educational and cultural programs between Armenia and the US. The most recent example is the screening of American films in number of provinces of Armenia.

-I’m sure, you’ve been to many countries, that gives you an opportunity to compare the traditions and culture of those countries. Is there anything special that you have noticed only in Armenia?

– I would single out the long history of Armenia. Armenians living in Armenia, as well as in the entire diaspora, including the United States, are very proud of their centuries-old history, as well as their investments in education, science and culture, which have left a mark on the development of humanity.

I’ve managed to visit a lot of museums in Yerevan, I’ve been in the Armenian National Academic Theatre of Opera and Ballet named after Alexander Spendiaryan, had meetings with cultural figures. Visited the provinces of Armenia and met our colleagues; as you know we have ‘American Corners’ in different parts of Armenia- in Charentsavan, Kapan, Gyumri and Vanadzor.

We also implement cultural programs in provinces, for example, we support the preservation of the Sanahin Monastery Complex with the funding of the US Ambassador’s Cultural Preservation Fund.

The ambassador had recently left for Lori region. And he informed about that program in Sanahin Monastery Complex. This is one of the cultural heritage preservation projects supported by the Fund. I should mention that the Ambassador’s Fund for Cultural Preservation has supported projects in Armenia since 2005.

-The next topic of our conversation is cinema. What is the secret of the upward development of the American cinema?

–It is a question that presupposes an extensive answer. I will mention a feature that is typical not only for American film industry, but also for America in general. it is  the respect for self-expression and freedom of speech. This is purely an American value, in tune with our identity.

The United States of America, being a country of immigrants, has always kept that value high. America unites different ideas and visions of people who immigrated from different places, which is also expressed in the field of cinema. Various stories of people of different nationalities, plus the freedom of speech and self-expression, have given their result, ensuring the development of the sphere.

– Does the American government have a policy for the development of cinema, or is it left to the preference of independent, free filmmakers?

– It is a mixture. In America, we have national foundations that support culture, and at the same time, there are generous donors, with whose funding films are made. A lot of people, while talking about American filmmaking, immediately think of Hollywood, California. However, the film industry is not only Hollywood. Filmmakers also make films in the eastern, southern and central parts of the United States, where nature is very diverse. 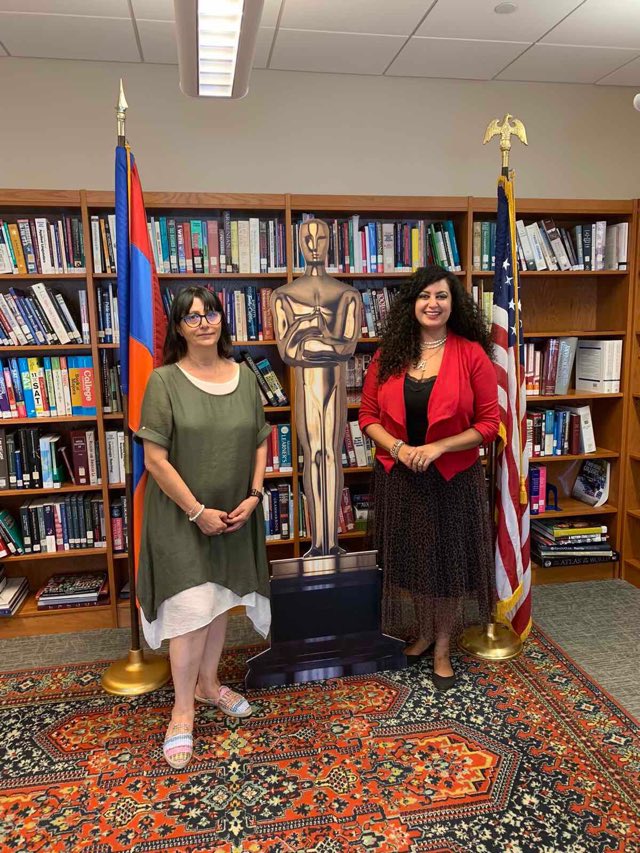 –American cinema makes up a large percentage of movie rentals in many countries of the world. On the one hand, it’s good that it is widely spread, but on the other hand, a lot of people complain that American films spread violence and similar vicious phenomena. Do you agree with that?

-I don’t think that in terms of spreading violence American cinema differs from films produced in other countries. If we make a general observation about film industry, we can say that the topic of violence exists in every country and American cinema is not unique in that respect.

Violence films, that I have seen, show the traces of violence, emphasizing that this phenomenon must be avoided by all means. Of course, there are also non-profound films, the purpose of which is simply to occupy the audience. However, the best films are those, which try to educate the audience so that they can learn lessons and reject the vicious phenomena.

– Does cinema really help people to transform, to fight against violence or to raise some environmental issues?

– Undoubtedly, films have educational meaning. And we compile the lists of American films based on that. Every year we offer different countries, including Armenia, to watch award-winning films the aim of which is to educate the audience. In Vanadzor and in Debed we showed American documentary films during the weekend. One of those films , which is called “Let’s do it to succeed”, is a series of stories. Young people living in different parts of the United States come together to solve problems that are of great importance to their communities with the help of science and technology.

The other story I really liked was about elementary school students, who were mapping the area around them, noting places where there was no electricity. The pupils went to the head of the community and substantiated that reforms should be made in those places, lighting should be installed, because it’s necessary for the safe movement of people. During the discussion of that film, a young boy from Debed said that after watching the film, now he views the environment differently, he thinks that he and his friends can change something and have a certain influence.

With simple, heart-warming stories, we try to show the public what America is like. For the screening of these films, we collaborate with cinemas, various companies, also using our “American Corners”.

-There is an accepted opinion that cinema and politics are closely related. Do you think so?

– It is a common approach. I remember studying a few subjects related to cinema and politics while studying at university. It is possible to use symbols and metaphorical meanings when serving films for political purposes. This is where the endless debate arises: does art imitate life or does life imitate art? I think cinema will continue to serve political purposes for a long time. With these films it is possible to make the historical events more accessible to the public, to present them in a new way. For many, watching TV series and movies is a way of better understanding information, which replaces reading a book or studying this or that topic, which would take a lot of time.

After seeing the screened story, it becomes easier to reproduce it.

– Are you familiar with post-Soviet Armenian cinema?

-It’s in the field of discovery for me. I’ve watched ”The Color of Pomegranates” by Sergei Parajanov. It is a valuable and an important film for Armenians not only because the author is Parajanov, but also because the film describes the episodes of Sayat Nova’s life. I would also like to talk about another film, ”The Promise”, produced in America, that tells about the hardships suffered by the Armenian people at the beginning of the 20th century. Armenian-American producers and actors are involved in this film.

-After the Armenian genocide, many Armenians emigrated to the USA, among them very influential filmmakers: Ruben Mamulyan, actress Flora Zabel, the first Armenian actress to play in American cinema, Arshaluys Mardiganyan, Akim Tamirov and others. Do you know them?

– As I mentioned, Armenians living in America have left their mark especially in art. A large number of American-Armenians live in California, not far from Hollywood, and their contribution to American cinema is undeniable. There is a talk that an Armenian-American museum will be built in Glendale this year. I am sure that American-Armenian directors, actors, producers, who have made a great contribution to the development of American cinema, will find their unique place there.

-And do you see opportunities for a joint Armenian-American film production today?

-Of course. I would like them to be, taking into consideration the fact that Armenia is a cozy country with a beautiful   nature and historical monuments. Yes, it would be desirable for Armenian-American films to be shot here, for Armenian actors and other representatives of the sphere to be involved.

-At the beginning of our conversation, you spoke about the Fund for the preservation of cultural values. Are there any similar film restoration programs in the future? By the way, with the help of the Martin Scorsese Foundation, Parajanov’s “The Color of Pomegranates” has been restored.

-We do not have such a program at the moment, but we receive other offers from our Armenian partners, which are being implemented. If there are movies, archives that need to be restored, you can submit a program. We will discuss and proceed with the offer with great pleasure.

-Mrs. Amirah Ismail, is there anything you’ld like to add?

This is a program to present a piece of American culture in Armenia.

I would also like to thank you for the interview, because it was an opportunity to talk about our ”American Corners”, grant programs supported by the Office of Public Relations, and to talk about the latest program of the American Film Festival.

I hope next time I would have learned more Armenian words, but for now, I will just say «Շնորհակալություն, շատ հաճելի էր» (Thank you, it was nice).

In July the Polish FIXAFILM studio started the restoration of Sergei Parajanov’s short film “Hakob Hovnatanyan”. In the summer, the...

Pavel Bednarik.Film criticism is losing its position constantly not only in the Czech Republic but globally