Founded in 2006 through the efforts of film devotees, BIAFF was held for the 13th time this year from 16 through 23 September at Georgia’s Black Sea coastal resort town – beautiful and hospitable Batumi. The festival organizers had realized that the small coastal town with a population of 150,000 was, in fact, a wonderful place to host a film festival. The town used to have 12 cinemas during the Soviet period, but now it has only one – Apollo, the favorite cinema of Batumi residents. 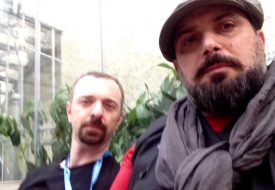 Due to the consistent efforts of the film festival Director Giorgi Gogiberidze and Manager Zviad Eliziani, BIAFF 2018 has become a hotspot for arthouse film lovers for 13 years. The movie spirit grips the town in the second half of September every year. For one week, the local residents, festival guests and foreign tourists merge with each other. The latter avail themselves of the opportunity to become involuntary audiences since the central town square hosts open-air film screenings every evening. You can often spot people sitting on the floor of the only hall of the town’s only cinema, since they never miss the sessions of their favorite films under any circumstances.

This year I had an opportunity to personally take part in the festival, follow its process, attend the screenings of competition films, get acquainted with and talk to interesting people. I had a long conversation with the festival manager, Zviad Eliziani about the cinema happenings, the focus of the film festival, its challenges and successes, and here we have an interview…

–Why did you pick a festival of arthouse films?

(Z.E.): In parallel to establishing the festival, we also needed to select its focus. We had to choose between arthouse and commercial films. Naturally, we picked the specific theme of arthouse cinema.

–It is known that arthouse cinema is not aimed at large audiences. It is interesting for specific groups. Are there such numerous groups in Batumi?

Z.E.– Yes, there are such [groups], who take an interest in arthouse films. Their number is not very high, but sees a year-on-year growth. People from Tbilisi also come to watch the festival films. Apart from arthouse films, we also have other programs featuring the best films of all time, which are neither arthouse nor fully commercial, but are interesting. In this sense, the festival seems to become accessible to different groups, satisfying everyone’s needs.

– How can you assess the development trends of the festival?

Z.E.–The festival’s development trends are positive. It is expanding year by year. Frankly speaking, we lacked enough experience in festival organization in the initial period. We started with one competition program – feature films – with the documentaries and shorts adding later. Today, we already have three main competition programs and rather rich and thematic non-competition programs, that come to complement the festival’s main program, making it more interesting and diverse.

On the sidelines of the festival, we organize workshops for the development of Georgian film projects in an attempt to promote the local film production. The independent experts engaged in the workshop works study the projects and provide their conclusions. As a result, 1-2 projects that gained the highest number of positive ratings are submitted to other international film festivals every year to get funds. Currently, they only comprise Georgian film projects, but we also plan to include applications from abroad as well. Of course, it will depend on our financial capacities.

–Do Georgian films screen at local cinemas? Does Georgia’s law “On Cinema” have any limitations; I mean the percentage ratio of local and foreign film screenings?

Z.E.–Yes, of course, people watch Georgian films. Some 4-5 serious films are produced per annum that hit the big screens, staying at the box office no longer than one week. I don’t refer to commercial-entertainment films, which stay at the box office longer. We obtain no exact figures on the visits, but the attendance numbers are quite high. In general, the Georgian cinema has recorded a significant progress in recent years, claiming victories in leading cinema platforms. The new releases also have festival screenings – premieres. For instance, the Batumi festival has the Georgian Panorama non-competition  program, which features Georgian productions of the past two years. We try to display them by organizing separate premieres.

In regard to the provision of the law on the ratio of local and foreign film screenings, I am not sure, but we seem not to have such legislative specifics. Notably, amendments and supplements are planned to be made to the law “On Cinema”. An annual sum of €2 million is allocated to the Georgian Cinema Center for filmmaking, which is a very small amount for the development of film production. If legislative reforms also target film investors in terms of easing their tax burden, I believe it will greatly boost the film production. Let’s hope it will be so.

–What do you think is there a gender problem in the cinema sphere, or is it a little built up?

Z.E.–I think that issue does not concern such small festivals like ours. First of all, we select good and quality films that meet the standards of our film festival, regardless of the fact whether they are directed by a man or a woman, a debutante or an established director. We only focus on the quality, that’s it. There is no such issue in Georgia. It may play a role in Cannes and other big film festivals in a sense that they can make this issue a part of the festival policies and one of its priorities, attaching importance to the protection of women rights.

–What can you say about the film rental and distribution?

Z.E.–The film rental issue is very complicated in Georgia, and I think the same picture is in Armenia. Major European and American filmmaking companies sell the copyrights for film screenings to the festivals of big countries. We, in turn, have to rent films from distributes of major countries, which causes numerous issues. I think we should join our efforts to create a regional film rental.

P.S. On the day before my return to Yerevan, I entered a sweets shop in front of my hotel. The good-looking saleswoman came forward to meet me with a smile on her face and immediately asked, “Have you come from BIAFF?”, pointing out my badge of the film festival. “Yes,” I said. “I love BIAFF very much, but don’t have time to watch the films; I am working,” she noted. I smiled. Then she quickly gave me exactly as much sweets as I had bought, saying it is a gift on BIAFF’s behalf.