“Where is the contemporary Armenia cinema hidden?” Aleksandr Atanesyan

Yesterday, on 3 May, a master class by Armenian film director, producer and scriptwriter Aleksandr Atanesyan kicked off at Mass Media Educational and Scientific Center. The class was entitled “Directing and the contemporary cinema” and was held within Lectorium socio-educational project.

“This is the first master class organized by Lectorium socio-educational project which aims to enable the professionals of the film sphere, as well as the interested people to gain new knowledge and to exchange their experience through the open master classes, lectures, meetings in pop-up lectorium format conducted by the renowned specialists of business, cultural, financial, psychological and other fields,” cofounder of SPRING PR company, head of international projects Tatevik Simonyan noted in her welcoming speech. 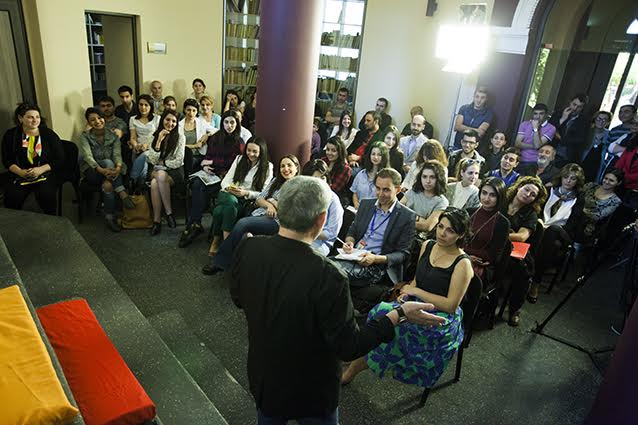 Special guest of the master class Aleksandr Atanesyan introduced the tendencies, peculiarities and development perspectives of the contemporary film production to the film industry specialists, cinephiles and mass media representatives. He shared his experience giving advice and opening professional secrets, then he answered to the questions of the attendees. 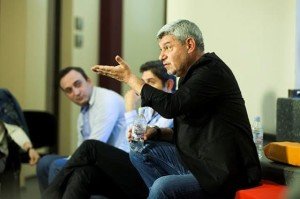 has its reasons. The issues are likely to be related to the educational system or to the lack of human resources. It’s not also excluded, that during the last 20-25 chaotic years the directors haven’t managed to realize what they what and how they want to carry out their wishes. But the fact is that I don’t observe movies of Armenian production in world film distribution, as well as in world film festivals. Thus, where is hidden the contemporary Armenian cinema?”

In response to one of the participant’s questions regarding the steps to be taken to develop the contemporary Armenian film production and to make the Armenian films competitive on international platform, Aleksandr Atanesyanhas noted that nothing is to be done, as the funding isn’t always the case. The only thing to be done is providing quality education and financing students’ debut films. In order to find out the potential of the young men they should be given an opportunity to present their graduate works. In that way it would be possible to discover talented students and to figure out the amount of money that is needed for them to make their films. And the only contribution of the state should be establishing and promoting the educational system. That is the most promising contribution.

Turning to the peculiarities of the contemporary filmmaking Aleksandr Atanesyan noted that today is the period of pop culture. We deal with society-based culture, and the high art is dying. We are very often interested in film watching not in creating it. The constant information flow enables the audience to feature the films they want to watch but not to understand them. In 1960s the concept of review didn’t exist and whenever a new films released everyone went to watch it. But today people read the film review and then decide to watch it or not. 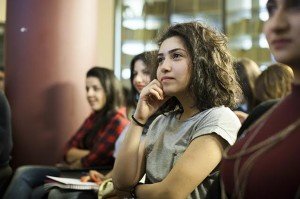 In response to the question why there are no female directors who have registered significant success in the field of cinema, Atanesyan said: “This is a profession of manipulators, cheaters, murderers, rapists, and if women obtain these features (excluding only manipulation, as they are born with that feature), they stop being a woman, as by nature a woman is to give life and not to take it.”

Lectorium new socio-educational project is implemented with the initiative of  “Yerevan Productions” and Imyerevan.com forum.

Aleksandr Atanesyan was born in 1953, in Georgia. He is the producer, scriptwriter and director of the movies “Bastards” (2006), “The Close Enemy” (2010), “Summer Rain” (2002), “Deadly Promise” (2012) and some others, and the animated films “Seal of King Solomon” (2012), etc. He has been the head of Angel Film Company. He is a laureate of numerous international film festivals (“Golden Globe”, “Nica”, etc.) and a member of leading academies in the field of movie making.