Hayk Hambartsum: “I have so many ideas related to my homeland that I am afraid ten lives might not be enough to realize them.”

Appearing in the international university realm of Paris, or as they call it in Cité, it is difficult not to notice the House of Armenian Students. It was constructed in the simple and classical style characteristic to the Armenian architecture and the Armenian ornaments give a spirituality to the building.

One of that students is American Armenian film director Hayk Hambartsum.On 25 April the films “CROSS+STONE”, “Pheasant” and “Metzarents” of the young artist were screened in the House of Armenian Students.

“Recently it is quite likely to come across Armenian surnames that lack the suffix “yan”.  Hayk Hambartsum, where has your “yan’ got lost?”

“My story might seem a bit unbelievable. In 2011 I paid a visit to Western Armenia and firstly I went to Kars City. There I had a dream which showed my surname written Hambartsum. At that time I had just completed my studies and hadn’t shot any work of art, except a documentary film about Mansuryan. I was searching. Finding myself in Yeghishe Charents’s place of birth and trying to regain my Armenian identity I thought that my dream was a sign. In addition to this the word “Hambartsum” is itself beautiful and meaningful for me. I think my surname sounds more Armenian without the suffix “yan”. Thus I decided to make Hayk Hambartsum my creative name.”

“And how did American Armenian Hayk Hambartsum end up in Paris?”

“I came to Paris to follow my two big dreams. Firstly I started learning French in Los Angeles then I came to Paris and entered the Sorbonne University. Currently I am doing my Master’s. Of course everything is new for me here. Even the education system is different from the one in the USA, but I am gradually trying to overcome the difficulties.” 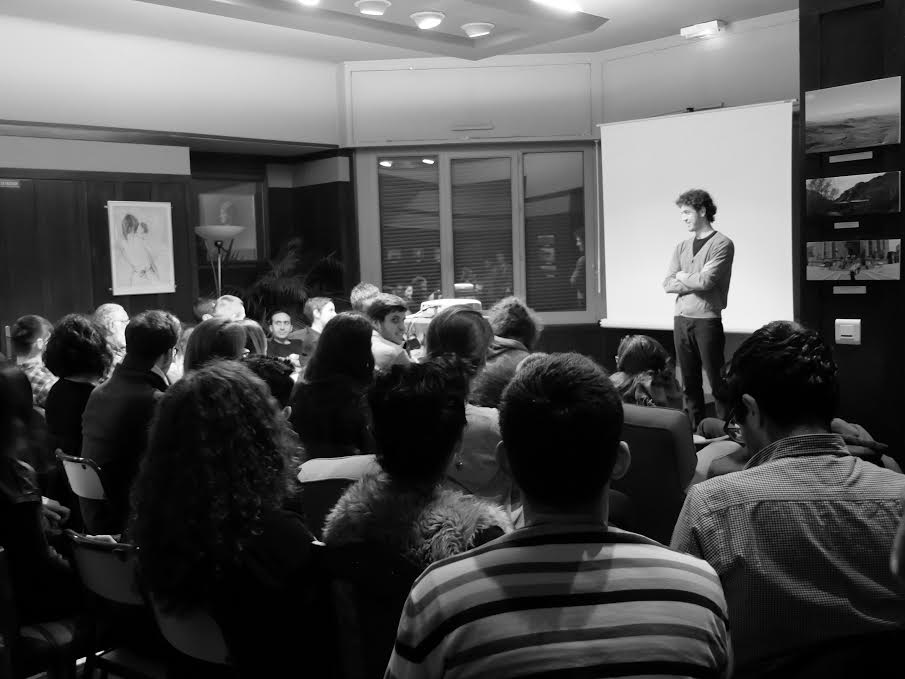 “The films “Pheasant” and “Metzarents”have been much spoken about in Armenia. What new projects have you implemented in France?”

“In Paris I completed the installation works of the film “CROSS+STONE” which had been shot in the liberated lands of Artsakh, in Qarvachar, in 2013. Previously it was quite a big project but in fact it turned out to be a short, experimental film. I have had an idea of a full-length film for a long time. But the shootings of the film is delayed as a result of numerous reasons. The first one, of course, is the absence of the funds. While thinking about that film I shot the films “Pheasant”, “Metzarents” and “CROSS+STONE”. But all these films are based on the idea of the full-length film which is always in my mind. Coming to Paris I put that project aside and was involved in another project but it was temporary. Now I have determined to use all my energy to shoot that film and to realize my dream.”

“It is interesting what is the film about?”

“It is about three architects who come to measure Marmashen Monastery. There some strange things start to happen to them which deals with the construction of the monastery. The characters of three boys are like brothers Karamazov and the story has some similarities with the novel “Ancient Gods” written by Levon Shant. But I noticed that resemblance later when reading the novel.”

“During one of the interviews you have mentioned that a film is a means of understanding and regaining your identity. Does Paris help you or confuse you even more in connection with that issue?”

“Your question is very interesting as I myself think a lot about it and haven’t still managed to find out the answer. This city has some attractive power and numerous strange elements. The difficulties I am facing here surely change me making me stronger. I have certainly gained a lot of new knowledge but I will be able to sum it up when I am far from this reality, from Paris.”

“In fact Paris is not your final place of residence?”

“I can state for sure that it is not. Paris is a stop which might be a long one, but the final destination must be Armenia. Of course it sounds beautiful and I understand how difficult it is to realize my dream, but I am ready to fight for it. I imagine my actual creative work to be carried out only in Armenia. I have so many ideas related to my homeland that I am afraid ten lives might not be enough to realize them all.”