Gagik Ghazareh: “We don’t want to tell the truth about ourselves.”

On April 19 to 20 and on 22 Armenian Center for Contemporary Experimental Art initiated screenings of contemporary Armenian short films. The program lasting 1 hour and 30 minutes included the following short films: Diana Kardumyan’s “Dialogues”, Tatev Hakobyan’s “Stranger”, Gagik Madoyan’s “The Road” and Hamlet Vardanyan’s “Farewell Volga”. The films with English subtitles were also screened. It is notable that these were paid screenings with the tickets costings 1000 AMD. The revenue collected during the screenings will be transferred to the prize fund of “One shot, 2016” International Short Film Festival. Kinoashkharh has discussed this issue and some others regarding the Armenian cinema with Gagik Ghazareh, Artistic Director of ACCEA (Armenian Center for Contemporary Experimental Art).

“Why have you decided to organize film screenings not in film festival format?”

“We believe that the featured films are the best ones that have been shot recently. The thing is such films that are screened within the framework of film festivals have short lives. You see, the idea of making these films live longer and organizing meetings with the film audience had always been there turning into an obsessive thought. And we decided to give it a try to see what would come out of it. And in fact this first attempt proved that we were right. There was a demand. Though the scale of the demand wasn’t large it was made by the quality audience. I also make judgements based on the reviews of the audience. Of course the issue regarding short films is quite different. Short film format is vulnerable, but it is fundamental at the same time. If we consider the factor of the short film audience we can claim that the society’s interest towards the short films indicates its higher taste of art. There is a commercial interest towards the short films worldwide. The American and Russian cinemas include various almanacs consisting of short films in the film schedule. And the audience enjoys that films. Why not? This system can successfully operate in Armenia and make profit. A cinema shouldn’t only resell films. It should put forward new ideas, in other words, it should impose “new fashion in cinema”.  But I don’t see this in newly opened cinemas located in hypermarkets of our city. You know, this idea would be very beneficial for the young Armenian directors as well, as they would be presented in highly publicized places known to the largest segments of the public. Besides, this might be a political issue based on the controversial cultural strategy. Its evidence is the current films full of dogmas and clichés the dominant genre being the comedy which is far from being funny.” 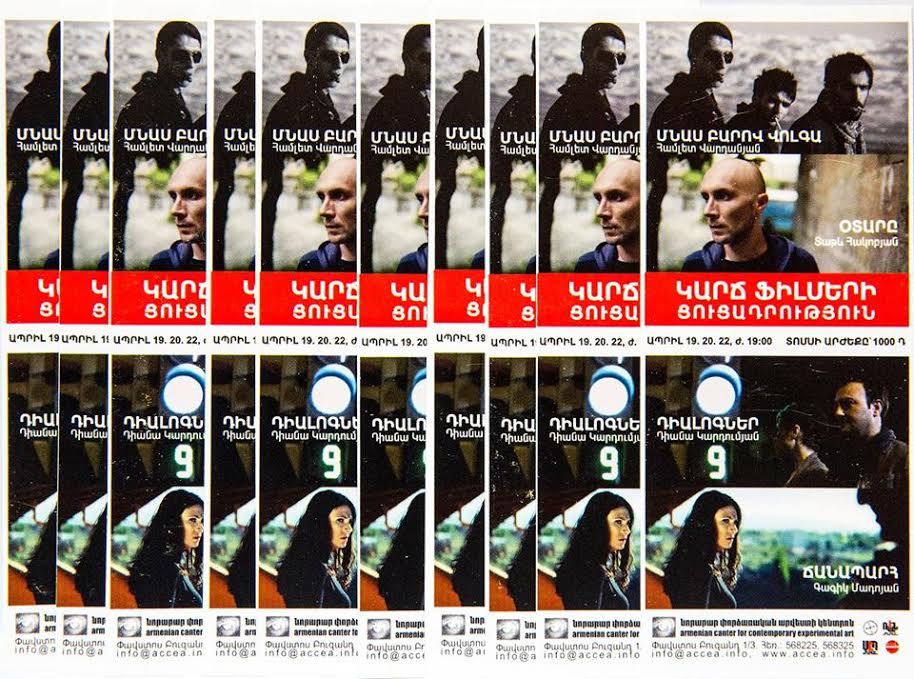 “Short film genre is traditionally considered an experimental and contemporary format which has more freedom and creativity.”

“A Short film is a basis. Every director begins his career with short films. Here he can make experiments and try new things. However, a short film is a complete one. It has a fundamental importance. It would be great if the government support the development of short films. That would generate the cinema sphere as new names would be discovered. A large number of people would be able to express themselves and make experiments in that sphere. Currently the state of cinema is very indefinite in Armenia. No appropriate conditions are available. An opportunity should be given to the new generation to express themselves. Short films are experiments that eventually lead to the great cinema. But our state indicates that we have failed having taken the wrong road.”

“Well, according to you what are the basic issues that prevent us from having a genuine cinema art?”

“We see the results annually. During the process of regarding the applications submitted to “One Shot” we watch a large number of horrible films. We are seeking a creative person. Our problem is that today the film makers are not aware of the film language. How do you imagine speaking or writing in a language that you don’t master. But this paradox is visible in our country and it becomes more complicated year by year. The basis, namely the film language, is missing.  Our cinema is not cinematographic at all. The film makers are not aware of cinematographic manner, the expressive means of cinema, large plans, montage thinking, detail featuring ….Many films lack this all. But it is an issue of 1910 which is simply considered ridiculous today.”

“Surely it is not the fault of cinema (laughing). It is the issue of our society. A human being, who grows up and lives in the environment surrounding him, should stay true to it and be natural. In our society an individual does not know how to be himself (sincere, real and free) in such an environment. This chain begins in the family turning into a closed circle from which there is no way out. Instead, there is a feeling of being doomed. Similarly, some people make films, tell their stories imposing their own lies on the audience and making them believe in them. Everyone knows that a lie has become the only possible model on which social and personal relationships can be built. And the life itself has turned into a model, a circle which we all are tried to be put into and kept in. There is an impression that they are trying to compress and suffocate the society in a can. This is a problem of the system and also of personality that really has a powerful energy field and is able to make distinctions and confront the crowd. We are imposed mentality and lifestyle everywhere. And this is the case in all the spheres. Cinema itself or art is a tool, a mirror that reflects all of us.”

“A simple, domestic episode can turn into a generalized story reflecting our social life. But it turs out that we don’t even mange to tell a story.”

“In fact we have a sick society today. It is like a paralyzed organism. Even if one of its organs does not function well, it effects the rest. Do you expect to have art or cinema in such a situation in which we find ourselves today, when life seems to have stopped around you as people don’t live but simply survive? We don’t want to tell the truth about ourselves. We want to create a vision, an illusion full of heroic elements. We should be an open, democratic society and also we should be diverse. It is advisable that we respect each other and seek real happiness.

The interview by Maria Tokmajyan