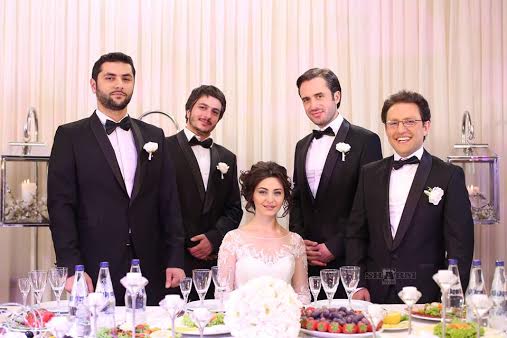 A large number of and seemingly endless product placements, famous names, a very beautiful actress (Diana Malenko), a very unexpected actress (Sona Shahgeldyan), legs and breasts of women, good music, a lot of animation, clichés that have become a norm, hackneyed characters, sometimes funny and sometimes simply rude remarks on the topic of and scenes of sex of humans and animals, also innovations and similarities with foreign blockbusters, yes, and also humor and a budget totaling to 400.000 dollars. Also a lot of PR (even at the cost of advertising the same film in the film) and a happy end: This is the order. This was the accumulation of the elements in an Armenian comedy according to the latest comedy “Hyusis-Harav” (director Davit Babakhanyan), the premiere of which was held on 10 September. Comments can be made on each of the above mentioned elements, but in order my analysis be brief and honest, I will restrict myself to mentioning the factors that made me allocate time and to watch the movie mainly from the viewpoint of a film journalist.

Thus let’s start with Diana Malenko…luxurious and lovely, lovely and luxurious, the ornament of the film. For the first time she appears, she looks very much like the young Elizabeth Taylor, and in some places she looks like Ingrid Bergman, but unfortunately, only in  her appearance. Especially when Malenko (with brand appearance) starts to speak, you know that an announcer of the Armenian television is talking. Likewise, by the way, when the theater actors involved in the film start talking, one is feeling that people with “knowledge of stage speech” and concrete “set voice” are speaking. And Mko, who is embodying another tycoon, starts to talk, you can identify the “diction of Kargin”. And in the movie Sona Shahgeldyan is the way she is. Generally, in Sona’s case her famous character has been used and she has played herself. But Sona Shahgeldyan was probably the “second factor” for which I watched the film. Earlier I had noticed that she had some “artistic vein” as she told about it during the premiere. And it was interesting what role the film creators had found for Sona (besides the fact that they renewed the “standard” cast necessarily seen in Armenian comedies). In honor to Sona I must say that she is exercising very appropriate facial expressions for a comedy, unlike many actors who show themselves due to their makeup and impressive names ensuring a commercial success, and they lead not only the facial expressions but also the whole acting to the exploitation of their own charisma.

Like many others, Sona too has unfortunately “worked” in favor of “rabiz”, which is taken as a humor on our television and films. In general, there are a lot of clichés in the movie, but this time with innovations and emphasized contrasts: a tycoon and a beggar, “thievish” musicians and educated musicians (represented by the four main characters), an eating-drinking mass and scholars (intellectuals), and an “innovation”- activists who are represented in a kind of humiliating and insulting way, in particular their leader “endemic Sona”, an aggressive and unsatisfied creature with piercing and tattoos, who is concerned about the mole breeding …

I sincerely believe that the average local audience will like this movie more especially when many of them are feeling nostalgia to “Kargin”. “Hyusis-Harav”, ““Kargin” and some other projects in that format reminds me of “Mer Bak” movie, just with a drawn-out plot, which could have lasted a few short sketches. It would definitely cost less.

Yes, and the budget of the film is impressive, I mean more impressive than the movie. By the way, the fine that Armenia has paid for delaying the construction of North-South highway for 3 years, is almost the same: 300.000 dollars.